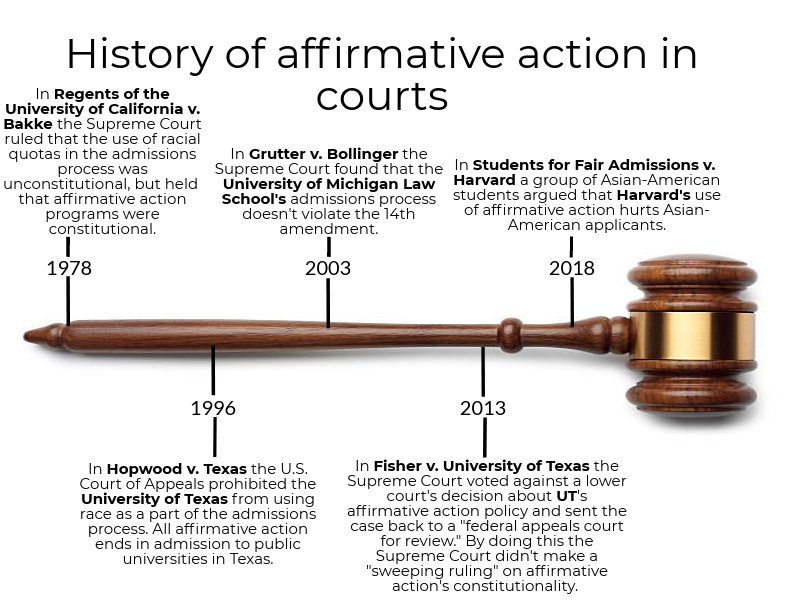 The lawsuit was brought on behalf of Asian-American students who failed to gain admission to Harvard and is, “one of the most consequential race cases in decades,” according to CNN. Students for Fair Admissions filled this case in Nov. 2014 and claims that Harvard purposely discriminated against Asian-Americans and give advantages to African Americans and Latinos in the admissions process.

Teacher Ted Venegas is half Mexican and said he used affirmative action to his advantage when he was applying for college.

“It has allowed me to put myself in a position where I do well financially and I am in a much better position than my father and grandfather were,” Venegas said. “I got good grades in school and as a result of ‘checking the box’ I got academic scholarships and was able to go to USC and then eventually get my law degree.”

Venegas also said even though he benefited from affirmative action, there will come a time where it will be hard to justify making choices based on race.

“I see the reason for it [affirmative action], especially in the past and to a lesser degree in the present. But I think eventually it would have to go away because it could end up doing more damage than it actually helps,” he said. “However, I wouldn’t say I’d like for it to go away in the near future.”

Groups on both sides of the case expect it to go to the Supreme Court. If it does, at stake is the 1978 Supreme Court ruling, Regents of the University of California v. Bakke, that “first allowed universities to consider race as one of many factors in admissions but forbade quotas,” according to CNN. With newly appointed Justice Brett Kavanaugh, there are five conservative justices who are likely to rule in favor of reversing the original ruling.

Guidance Counselor Roberto Suarez said if affirmative action was eliminated it would go against some colleges whose mission includes having a diverse class.

“It would tie the hands of many institutions to not ask that question [about racial background]. Within five or ten years, they may become the school they don’t want to be and be a lot more homogenous.”

Suarez also said things like test scores a lot of time have a high correlation with socioeconomics and for colleges to not know of a student’s background could deprive that student of the opportunity to go to schools normally rich people would go to.

Suarez, who is Hispanic, said his parents grew up in a different countries and the experiences they faced when they came to the United States shaped them and him as well. He said he believes affirmative action is necessary to have, especially now.

College Consultant Brad Kain said the Harvard case could change how colleges operate and if affirmative action was eliminated his biggest fear would be that college admissions would go back to the way it used to be.

“It would go back to would could pay the most, is the most educated and know how to navigate the system efficiently,” Kain said. “What happens is that other groups will get pushed out and the rich will get richer and the poor will get poorer. The two sides will continue to be separated more and more.”

A ruling in the Harvard case in the initial district court phase is a couple of months away and US District Court Judge Allison Burroughs will be holding post-trial briefings before making the official ruling, according to CNN.

“Affirmative action increases diversity on college campuses and gives others a chance to go to a university they haven’t got the chance to in the past,” Kain said. “The world is diverse and we need to do a better job not just in the college process.”