Is recycling being taken seriously? 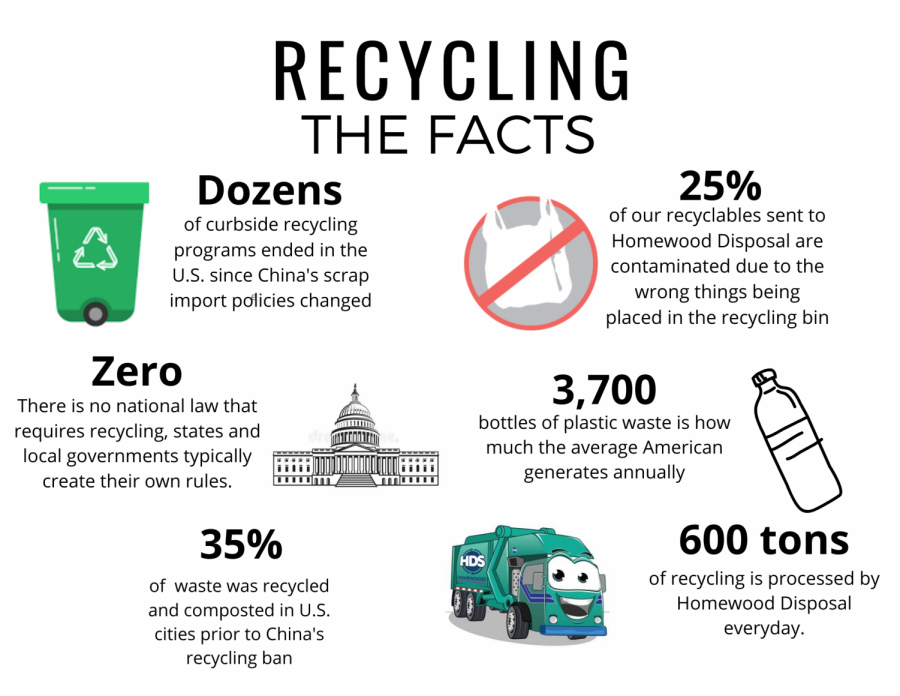 As the amount of plastic waste continues to mount in landfills across the U.S, many are concerned for the future of the country’s recycling.

Since China, who took in two-thirds of the world’s plastic waste in 2016, banned the importation of plastic waste globally, U.S. recycling programs faced the challenge of figuring out where to process the materials. This is because there aren’t enough recycling plants in the U.S to process all of its recyclables, causing much of the waste to be distributed in landfills.

According to the New York Times, since the ban “dozens” of municipalities have canceled their curbside recycling programs.With their being no national recycling law, states and local governments are usually left to decide their recycling regulations.

However, there are national recycling laws regarding toxic materials such batteries. This is the Universal Waste Rule. This law was created because most batteries contain toxic chemicals like cadmium, lead, lithium, or sulfuric acid, according to Call2Recycle.If these batteries end up in landfills the chemicals in the battery can leak out and damage the environment, possibly ending up in the food chain.

“The majority of our material stays here in North America. China’s ban has prompted us and all other facilities in the U.S. to take a good look at the material we receive. With such high contamination rates in the U.S., we started focusing on educating customers on what really belongs in the recycling bin,” Education Coordinator for Homewood Disposal Megan McElligott-Laxton said. “We see a lot of people thinking they are doing the right thing by throwing everything in their recycling bin, but that leads to higher contamination levels and slower sorting times.”

McElligott-Laxton also said that Homewood Disposal started the “Basic Recycling is Better Recycling” campaign in 2019 in an effort to “educate the customer” on proper recycling techniques. The campaign includes videos, articles, and more.

Homewood Disposal processes about 600 tons of recyclables a day and 25 percent of it is contaminated because people put things like plastic bags, pizza boxes, electronics, plastics marked number six, and more.

The company picks up recycling and trash from H-F Monday through Friday. The amount of recycling picked up from the school was unavailable to us.

A common rumor around the school is that a lot of our recycling isn’t being recycled, and is dumped in the garbage.

“The rumour of our not recycling has been going on for years. Recycling has become such a complicated matter lately with reports circulating throughout the media recently,” Director of Operations and Management Thomas Wagner said.

Wagner also said that Homewood Disposal picks up the school’s recycling on Tuesdays and Wednesdays.

“We have on site different recycling containers that we fill daily with recyclable products from cardboard to plastics. Classrooms are picked up on Tuesdays and placed in the bins [larger bins with all of the school’s recycling] until all the bins are full,” he said.

Besides the recycling bins, we found that there isn’t a recycling initiative at H-F. There is the Environmental Vikings club, but, according to club sponsor Gina Slusinski, the club isn’t focusing on recycling this year.

“Because our club changes focus each year [we have] new ideas to discuss and activities to do. Plus our club is more about ecology and natural history, so we talk about the environment in terms of ecological aspects of it,” she said.

McElligott-Laxton had some suggestions for creating a successful recycling program at our school.

“I would suggest, if you have a Green Team, or something like that, maybe they get together and create signage to put by all of the containers so students know what belongs in them. When it comes to recycling at schools, it’s best to keep it simple,” she said. “Maybe have designated containers for different material (especially in the lunchroom) like one for paper only, one for aluminum, etc.”

Principal Dr. Jerry Lee Anderson said the school still has some work to do with recycling.

“We have a recycling bin in our [the Principal’s] office, but sometimes when I leave my office, in order to find a place to recycle I have to walk a long way. To encourage people to recycle it has to be in front of them,” she said.

Anderson also said that if we make an effort to recycle more there will be an impact.

“We had a student last year who was a really big proponent for it, made some signs, put them up and made a plan for how we were going to disburse the recycling bins. Recycling is a mindset. We’re a school with three thousand people—that’s a big carbon footprint. If each of us decided in our school and home to make a change there will be an impact,” she said.

To gain more knowledge about recycling and learn what can and cannot go in your bin visit the Homewood Disposal website at mydisposal.com.