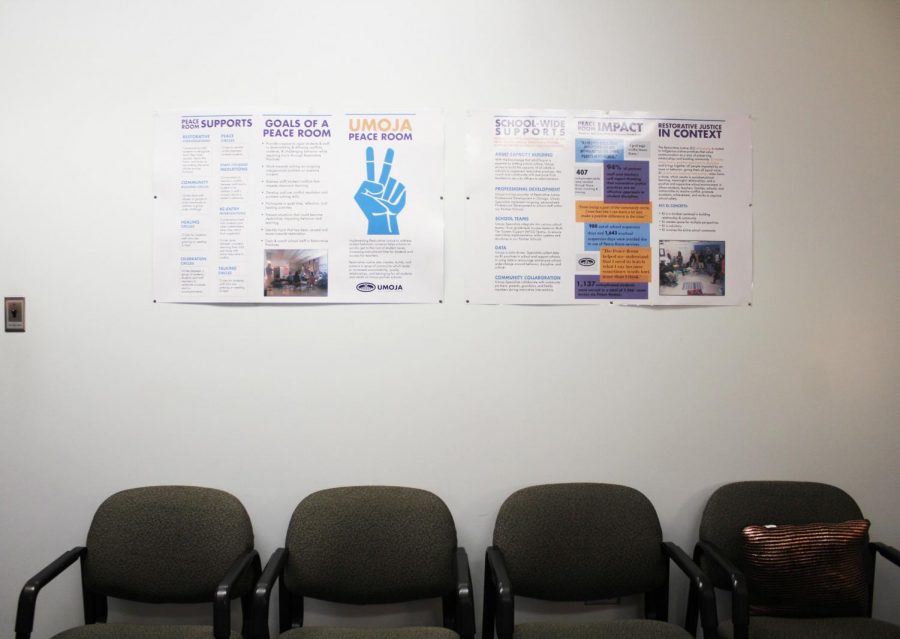 All are welcome: Part of the peace room which is located in the deans office in North building. The administration hopes to expand restorative justice practices starting next school year.

The restorative justice program, a program focused on alternative ways to handle conflict, was implemented this past school year.

Restorative justice is a “theory of justice that focuses on mediation and agreement rather than punishment,” according to WeAreTeachers. This concept isn’t new, as countries around the world, including the U.S., have used restorative justice in the criminal justice system.

This led to the implementation of the program into schools across the country over the last few years.
English department chair Janet Daniels said the administration decided to implement the restorative justice program at H-F for two reasons.

“Some of the data we were receiving back from the state of Illinois was on the high end in terms of the way we were handling discipline issues…restorative practices allows us to put in some additional measures that may help alleviate some of those statistics,” Daniels said. “The second part is that restorative practices focus on students recognizing their accountability with their actions.”

As a part of the program, if a conflict occurs between students, there are many different procedures that may take place besides traditional punitive consequences such as detentions and suspensions. These consequences are more restorative and focus more on asking “what happened?,” “‘what was the root cause?,” “what needs to happen to fix the relationship or the harm that occurred?” and more.

“Students can be involved with meditations with one another, they can be invited to participate in a circle, go to the peace room to work out their conflicts, and there’s also measures to help students who have done something wrong to reenter the school environment and some supports given to them to be more successful in the future,” Daniels said.

The peace room, which is run by dean Danielle Lusby, is a place where teachers can send students who have had a conflict.

“One of the best parts about being a dean is that a part of the curriculum I teach directly relates to everyday life and the habits that increase social capacity. While I wholeheartedly believe in the academic rigor and work that we do here as an educational organization to prepare our students, I also believe that the social and emotional skills we teach and develop are as important,” Lusby said. “I wanted to use that personal belief along with my belief in the philosophy of restorative justice practices to create a space to better assist students in preventing, de-escalating, and diffusing conflict (even within themselves), and to be able to help restore a sense of dignity to us all when things go awry.”

“It [the peace room] has been effective in helping students to calm down from whatever issues they are having throughout the day so that they can get ready to learn and also it has produced successful peer mediation,” she said.

Davis also said she thinks restorative justice will have a good impact on the school if used the “right way.”

“If teachers can apply those restorative justice practices in their classrooms first, I think the need to refer students to the dean will be minimized,” she said. “Even if students need to go to the dean I really do like the fact that restorative justice is all about restoring relationships and those are important life skills that students need to learn. I think it’ll be really successful.”

Principal Dr. Jerry Lee Anderson said she has seen first hand that restorative justice works because these practices were used at the last school she worked at, where she was the principal. She said there were very few suspensions and that she could only think of one instance in the time she worked there that there was an expulsion.

“Most people say ‘that’s because you had a different population of students,’ but I think it’s because the way we responded to discipline sometimes was just different,” she said. “I do know that it [restorative justice] works if people give it the opportunity to work.”

Anderson went on to say that she does think that the restorative practices implemented at H-F have been working so far.

“We’ve had less physical altercations this year,” she said. “I think our students are working harder, making more deliberate decisions about the choices they make, and taking advantage of the resources that are available to them, including the peace room.”

Though the program focuses on restoration, a common misconception about it is that students are no longer being punished, Daniels said.

“Restorative practices tend to be used in conjunction with consequences and punishments Daniels said. “But really it’s kind of an add-on to discipline measures and it adds a social-emotional aspect to it [discipline].”

As a part of the restorative justice program classroom norms, which are agreements for the classroom decided by students, were created throughout the school at the beginning of the year. Next year the administration school is looking to implement school wide norms, according to Anderson.

The restorative justice program is a newer approach to discipline, so many may not understand how the program works.

“I’d say the most important thing to understand is that restorative justice practices are not part of a prescribed program that can be gauged through standardized means. It’s a philosophy, or a belief in the value of all people, and it requires cultural and behavioral shifts of thought about stakeholders in the school community,” Lusby said.

Though Anderson believes progress has been made, she said the restorative justice program still has more work to do.

“It’s a work in progress and really a kind of change in mindset. It’s our job to get you [students] ready for the next steps in life. Conflict is inevitable, there’s always going to be conflict, but how you handle it is what makes the biggest difference,” she said.