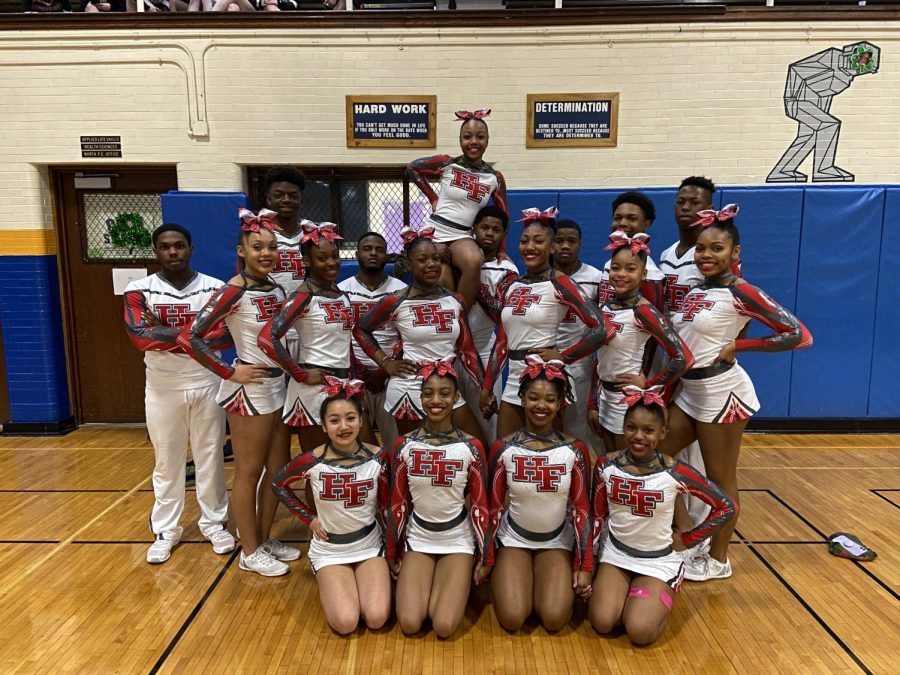 The Viking cheer team posing after their third place finish at Sectionals and securing a spot at state.

The H-F cheer team had a successful season topped off by them making an appearance at state. Although they placed 22nd in the state, this is a step up for future trips to championship competitions.
Getting 22nd may look a little dreary compared to their other state run placements, but this placement is paving a way for future H-F cheerleaders to make a run at state and possibly even come home with the title of state champions.
The team competed in the co-ed division because there are males on the team, and they have been in the co-ed division for a few years. The Vikings placed third in their sectional against heavy competition and made it past sectionals for the fourth time in six years.
They advanced out of their co-ed division with Lockport, Joliet Central, Romeoville and Bolingbrook, and they placed 22nd in their division. Although they did not make finals in state, they now realize what has to be done to get to that point.
“I feel like the placement was correct because we did not put our best foot forward. We knew what we had to do, but we just couldn’t execute it that day,” junior Alexis Mackey said.
The cheer team was very new to this level of competition, but this experience granted them the capability to perform at a higher level next year. Being told about state and experiencing it firsthand are two completely different feelings, and Head Coach Zenia Boyd believes that this experience will take the team far in the future.
“We had a very young team this year. Only four members had competed at the state level. The remaining 14 cheerleaders were inexperienced and did not know what to expect all year. They only heard talk about state. They now have an invested interest to return and place high in the rankings. I am confident that next year they will continue to work in excellence and make H-F proud,” Boyd said.
The team is confident that they will make it to state next year. They will have almost the exact same roster with the exception of senior Emmanuel Jackson, who will be graduating this year.
The roster changes will not affect the Vikings because they are willing to put in the work to make it back to state for a second year in a row.
“I think we could have placed better, but this makes us want to work harder and get back to state. It was truly a learning experience for us all,” sophomore C.J. Loyd said.
The state experience has immensely benefited the cheerleaders because the participants who previously didn’t have experience now know what it feels like to be in that type of environment. This will give the team an advantage with having a veteran roster.
The team is expecting nothing but the best from the coming seasons, especially with the coming talent from the younger teams. They’re looking to build on the successful path that was laid by the run at state this year to get back to state next year, and possibly a state championship.
“We will definitely make it to state next year. The cheerleaders are more aware of the consequences if they do not work hard. We have lots of talent moving up from our lower level teams, and we are looking forward to the talent arriving from our feeder schools,” Boyd said.
The team has a long time until the next season, but they are willing to put in the work to come out on top and win the program’s first ever state championship.