Moving from one win to the next 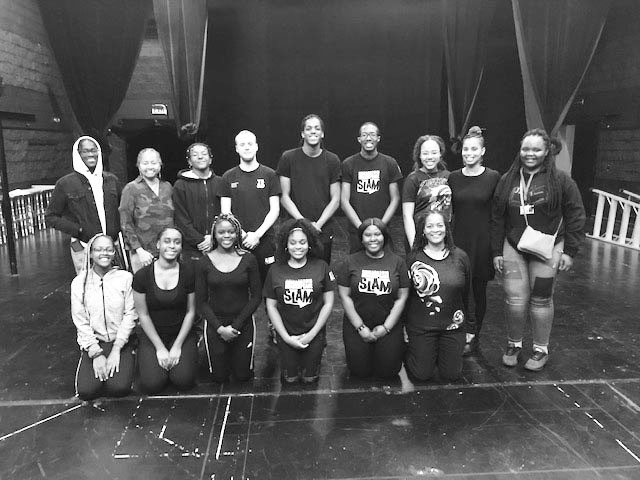 H-F’s Poetic Expression Club has been doing well in their competitions and is now getting ready for their next competition Louder Than A Bomb on Feb. 28. English teacher and club sponsor Jeanne Miller is making sure the team is on track to be ready.
Founded in 2001, Louder Than A Bomb is a big youth poetry event for youth in the Chicago-land area. Poets do workshops and show off their poetry at the event. Over 500 youth poets go to represent their schools and communities.
“We competed in Battle of the Bards at the end of last year and we tied for second place in the Chicago region,” Miller said.
In the past, they’ve made it to the quarter-finals in Louder Than A Bomb and getting second place in the Chicago region was some of the team’s biggest accomplishments.
Normally, the club meets on Wednesdays from 3:15 p.m. to 4 p.m. in A-18. They start with a warm-up exercise and a writing exercise. Then members are allowed to share their own work with the rest of the members.
Louder Than A Bomb and Battle of The Bard are the two big competitions that they compete in every year.
To prepare for Louder Than A Bomb they practice twice a week from 3 p.m. to 6 p.m., and they work on their own solo poems which are required to be three minutes long. Additionally, they work on group poems which involve four members outside of the club.
They have to audition with their piece, then Jeanne Miller will decide the 10 people who will represent then but only eight will preform.
Junior Sola Adeyiga joined the club her sophomore year, she was drawn to the club by the enthusiasm of it all.
“They’re a very friendly group of people,” Adeyiga said. “They really like expressing themselves and they wanted me to join.”
Another member of the club who is heavily involved is senior Andreu Mason. He joined the club at the end of his freshman year. This will be his third year competing at Louder than A Bomb.
“I was in my English 1 honors class, and we had a poetry unit,” Mason said. “My teacher recommended me to Mrs. Miller and I talked to her and she told me ‘you should come whenever you can’.”
He performed at seven performances including Louder than a Bomb, an open mic called Word of Mouth, Pursuing the Dream and at a church.
“I would really like to be a performing artist,” Mason said. “ Poetry is something that I would really like to do.
He would love to have his own open mics and different competitions of his own.
In the future, the club plans on hosting poetry opportunities throughout the school and having a VTV segment sometime this year.
“If you love hearing it, speaking it, or writing it and if you want a safe space to explore how you feel about the world, you should give Poetic Expressions a try,” Miller said.