What Happened to the News? 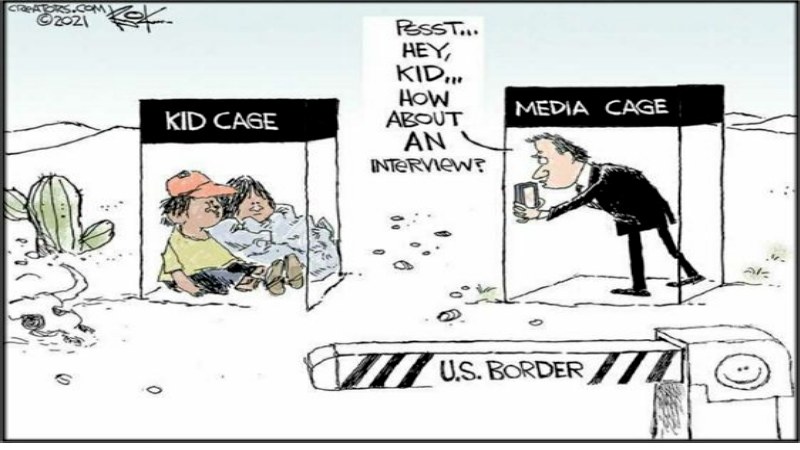 In the illustration above the media is shown harassing young kids in a immigration cage. Emphasizing how the news only cares about the story not the people involved with the story.

What do you think of when you hear the news? I think of informative, unbiased and relative information. Sadly, the news has become the exact opposite, there is racial bias displayed all over the news. The news isn’t very informative as they release the wrong facts about the issue countless times. In my opinion, the only thing modern-day media cares about is relativity and views.

Situations like Nyaira Givens, a 13-year-old who was stabbed to death the same day Ma’Kiah Bryant was gunned down just shows how the news nitpicks what stories to run. I know these are two different situations but you see one case made headlines on news services like CNN, USA Today, and various other big news outlets. The problem is the fact that Ma’Kiah got more representation because a white cop killed her rather than the 13-year-old who was stabbed to death and died in her father’s arms.

See, the news wasn’t going to give this story as much attention, why because sadly they don’t care. They don’t really care about Ma’Kiah Bryant or Nyaira Givens; they care about the narrative surrounding each story and what is going to get more attention. They are knowingly doing this and while doing this are in the process they are adding to this ugly narrative that the police are racists and bad especially when they’re dealing with a white cop and a black man or woman.

Another example of this is the death of  George Floyd, What happened to George Floyd was horrible and should not have happened. It was a good example of police brutality, but the news showed it as a racial hate crime. When it just wasn’t, the cop was just an idiot who killed a black man and which is why he is going to jail for a very long time.

Once again though there was a very similar situation which was worse than George Floyd’s situation. Back in 2016, Tony Timpa, a white man was murdered in the same fashion as George Floyd. Tony was a man who suffered from schizophrenia and depression and had not taken his medicine the night the incident occurred. Yet, the police officers on the scene instead of helping Tony laid him on the floor and proceeded to make jokes about his conditions. While one of the officers put his knee in Tony’s back as Tony laid face-first into the dirt. Tony later died in the ambulance as he wasn’t breathing.

Now, I didn’t know about this when it happened. It took me almost 5 years to even know this happened. No national headlines, no riots, no real recognition and no real justice was served. The officer’s charges were dismissed, people protested but no real justice was served, and poor Tony’s case was forgotten by everybody and even swept under the rug.

Now, this isn’t a competition, both situations are horrible, I am not saying Tony deserves as much as Floyd or anything like that. I simply want to show you the problem here when it comes to the media’s coverage. The news and media outlets pick and choose what will get them views not to really spread awareness in our country. They don’t care about black lives, they care about black views. They don’t care about police brutality, they care about creating racial tension between the black community and the police.

Even when it isn’t about race they still rush stories and get the facts mixed up like this article from the New York Times. It states that officer Brian Sicknick, an officer there that day died from a fire extinguisher that was used to hit him over the head. The article later clears up these allegations and says that he really died from natural causes.

The problem here is that they misinformed all these people thinking that this man was killed by Trump rioters directly. This adds to the narrative and stereotype that Trump supporters are just these evil and crazy people. When in reality the man died from natural causes a day after the event took place. This is a problem because when you state wrong facts and you are a big-time news corporation people just believe you because of your reputation. So it is your responsibility to inform the people and not mislead them.

Based on what I have seen the news has become nothing but entertainment and gossip. The weatherman has become more reliable than the news anchors themselves. Instead of chasing the story or the thing that is going to give you the most views and revenue, how about we inform the people like we’re supposed to as journalists.