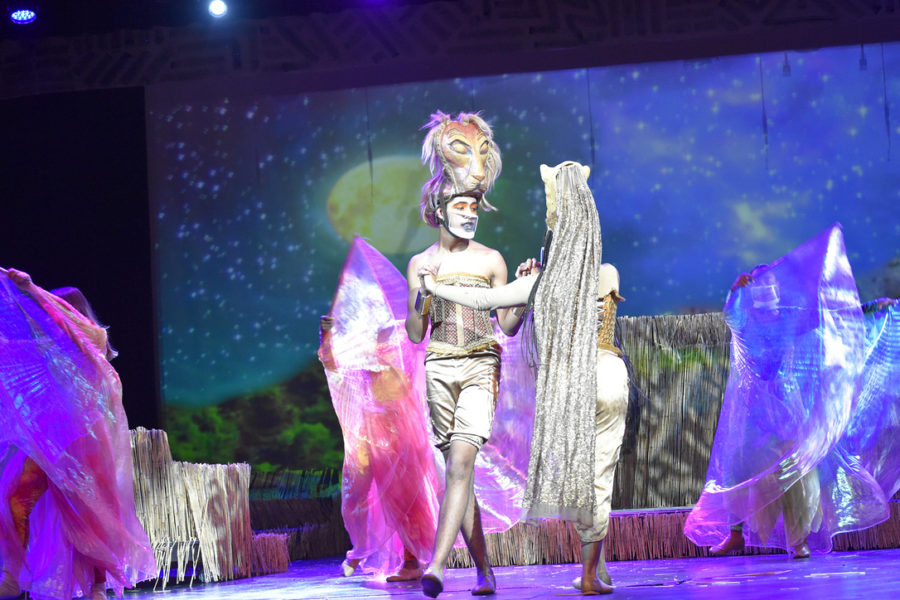 Jadon Smith as Simba in H-F's production of the Lion King.

People seem to use one word to describe H-F senior Jadon Smith: creative.

However, in addition to just being creative, he also sings on his own, writes music and gets compliments on his original songs from Katy Perry, Lionel Richie, Luke Bryant and Ryan Seacrest.

“Jadon is one of those few students that have the talent and the work ethic to succeed in shows like American Idol or The Voice,” said H-F choir teacher Steven Sifner.

Along with being incredibly talented and having a fantastic work ethic, Smith also is “an excellent role model and an excellent leader.”

However, he didn’t earn all of these praises by himself, he’s also had his family backing him up along the way.

For many famous people, familial support is imperative to success. For Smith, this person is his dad.

“My dad’s definitely been my biggest inspiration, he’s also the one that pushes me the most,” said Smith. “He’s been my mentor when it comes to music. Every time I’d write a song and I’d show it to him, and he would give me suggestions. I’d come to him with a song that I’d been writing and working on that’s like a 7/10 and he’d give me suggestions and I’d fix it and come back and it’d be like a 15/10, which is definitely a huge help every time.”

Even auditioning for “American Idol” is an amazing feat, but being asked by casting producer Nancy Yearing not only to audition but to reaudition, is an even more amazing one.

Smith did talk about some changes that he made between his first and second audition, the latter getting him to Hollywood. Some of these changes included singing an original song for his second audition and taking lessons from a vocal coach throughout the entire Idol experience.

While “American Idol” is a singing competition, there’s also more to it than that. Smith was able to meet all of the stars one would associate with the show, including Perry, Richie, Bryant and Seacrest.

Smith noted the kindness of the stars, particularly Seacrest.

“Ryan [Seacrest] was talking to me before I went into my very first audition,” Smith recalled. “I was the second person to audition that day, so it was a very nerve-wracking experience. He kinda calmed me down, talking about my braces’ colors and stuff.”

Now that this season of “American Idol” is over, Smith admitted that “I probably wouldn’t do it again. It’s more of a political show and not really about talent, and I don’t really have that story that carries for whatever the producers of American Idol are looking for. So I’d rather just do my own thing and let my talent speak for itself.”

You can hear some of his incredible music, taking inspiration from Shawn Mendes, Brian McKnight and Bobby DeBarge, on Spotify at Jadon Giuseppe.

In terms of letting talent speak for itself, Smith said that he “loves performing originals, but especially one called “Northern Lights.’” which was written in collaboration with his friend and H-F alum Jonathan Kriarakis. Smith notes that “when we would sing that song it’s always just so mellow and smooth and our voices just blend well together.”

Smith has definitely begun to cement himself into the list of H-F’s superstars, but just how far does this up-and-coming, homegrown artist plan to go?

We’ve seen a lot from Smith so far, and we should definitely plan on seeing more from him in the future.