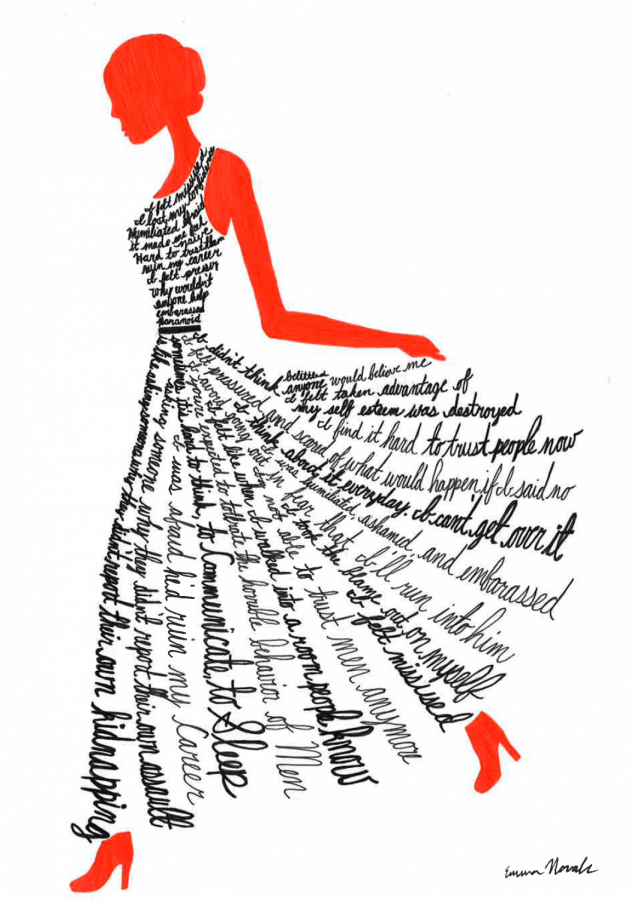 From actresses to professional athletes to the women you go to school with, females everywhere are coming together to say #MeToo.

First created by Tarana Burke in 2006 to support African-American victims of sexual abuse and harassment, it’s given a voice to sexual harassment and abuse victims.

The movement to expose sexual misconduct has shaken up not only the media, but our own community.

In fact, when English teacher Sahar Mustafah first spoke to friends and family about #MeToo, she discovered “nearly every woman in (her) close circle of friends and family had been sexually harassed” at some point in their lives.

It was the beginning of sophomore year for Jane, whose real name The Voyager has decided to withhold.

She’d only been talking to a boy for a few days when she went over to watch a movie, and he made a move.

“He started getting mad, and I wasn’t comfortable yelling, so I just said, ‘I don’t know, I guess’,” she said.

Jane’s experience isn’t so uncommon. 1 out of every 6 women has been the victim of an attempted or completed rape, according to RAINN, the Rape, Abuse and Incest National Network.

“I was depressed about it for a while, but I’m in therapy now. It was my first experience with someone, and I felt like it was taken from me,” she said.

Jane said she’s happy the movement is in the media, but she’s worried people will continue to underestimate how often sexual assault occurs.

“I feel like women speaking up is becoming accepted, and that’s great. But people still aren’t taking it as serious as they should.

Until now, everyone has just kept quiet about it,” she said. “People didn’t even know it happens as much as it does. It’s so common that a lot of times you don’t even realize it’s happening.”

Sexual abuse and harassment is everywhere; it can take place in a woman’s workplace or in her school, but for Holly (which is not her real name), it was her own home.

“I was raped and molested by my own brother beginning when I was six years old; it truly didn’t stop until I was about 10. I couldn’t find it in myself to speak up about it until I was 12,” she said. “I spent years brainwashing myself that it never happened and even grew subconscious fears, like of being alone and trusting others.”

Although women are finally being encouraged to speak up, that wasn’t the case for Holly.

“My family didn’t believe me when I finally spoke up, and to this day, a decade later, they still don’t believe me and have swept it under the rug,” she said. “But I’m beyond happy for other victims who are able to speak up and expose these sick predators while spreading awareness.”

#MeToo also speaks for women who have been sexually harassed at work.

“In a professional theater production when I was a teenager, an older actor twice my age made various inappropriate comments, and as a teenager I didn’t know how to properly respond,” Calderon said.

Senior Courtney Pugh’s mother Pamela Pugh had an unpleasant experience in college at Bradley University when her Psychology professor made an inappropriate comment.

“My psych professor, whom I admired, said to me ‘Why are you putting in all of this hard work anyway? You’re a very attractive young lady; I’m assuming you’ll marry well, we don’t need to have this conversation,’” Pamela said. “I’m sure he never said that to any of his male students.”

Pamela said it is “valuable, liberating and necessary for a young woman to share how she’s been abused, discriminated against or even neglected.”

Social Worker Phillip Barker urges students who are victims of sexual harassment or assault to talk to a counselor, social worker or any trusted adult.

“I think women are often victims of feeling paralyzed or fear of disrupting the workplace. Their fear of being characterized as a damsel in distress or their complaints not being taken seriously,” Ross-Cook said.

The #MeToo movement has made it okay for women to come forward.

“I, too, am one of the many survivors that was sexually abused by Larry Nassar,” USA Olympic gymnast Simone Biles said in

Science teacher Kathryn Stolzenbach, a former gymnast, said the story is both inspiring and sad.

“I know the coach aspect. Patients are sometimes trusting them with their lives while their spotting you,” she said. “When they send you to this doctor who is inspecting you in your bed…. at that age the shame kicks in big time. If you have a really strong sense of self, you are more likely to speak up.”

“It’s about education,” Mustafah said. “We need places where we can have dialogue, it can’t just be the women giving the stories, it has to be the male counterparts and everyone else.”

The Voyager • Copyright 2023 • FLEX WordPress Theme by SNO • Log in